On a late September Sunday morning at barely 1AM, sixteen miniature horses emerged from a trailer to glimpse their new surroundings.  It had been a long, sixteen-hour journey direct from the Houston SPCA’s equine facility in Hempstead, Texas to the Harmony Equine Center in Franktown, Colorado, part of the Dumb Friends’ League organization based in Denver. The autumn season had arrived in Colorado after an extended summer that saw temperatures regularly in the eighties and nineties. Now it was down to the fifties, and the Rocky Mountain chill had set in. 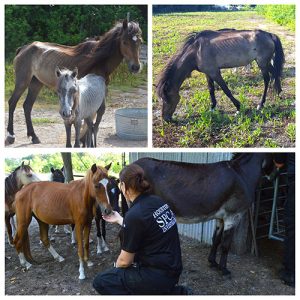 The sixteen horses ranged in age from eleven weeks to fifteen years, and had originally been part of an eighty-horse herd that had been seized as a result of a cruelty investigation by the Houston SPCA a month earlier.  Cruelty investigators and trainers helped transport the horses to the SPCA facility in Hempstead where they were to stay until getting adopted. However, Hurricane Harvey arrived shortly afterwards, wreaking havoc and devastating much of the Houston area.  Hundreds of animals in need of safe quarters soon overwhelmed local animal rescue sites.

Fortunately the Houston SPCA already had an established relationship with the Harmony Equine Center. Back in 2015, Harmony Equine took in fifty-nine horses from them, after two hundred and seven had been seized by the Houston SPCA, and later re-homed them with different local horse rescues. Seeing that they were once again in need, the Colorado group contacted the Texas organization.

“We have a long, lasting relationship with the Houston SPCA,” says Garret Leonard, director of the Harmony Equine Center. “We support them and collaborate on different projects.” 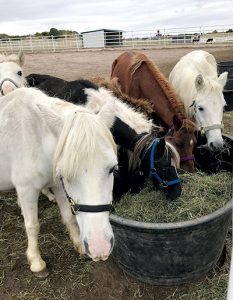 Sitting in his office near a training arena in the main barn, he explained their mission. “We always have space for cruelty cases. Always. Collaboration is key.  We asked them what we could do to help, telling them we’d be willing to go down there and bring back fifteen or sixteen, however many could fit comfortably on the trailer.”

The horses would not pose any sort of problem for them in Colorado since the center had taken in minis before.  Established in 2012, the one hundred sixty-eight acre Harmony Equine Center was originally designed as a law enforcement impoundment facility for neglected horses, ponies, and donkeys. They have memorandums of understanding with forty-six different counties in the state, where they work with different sheriff’s offices. Leonard is one of eight State Bureau of Animal Protection agents working for the Dumb Friends’ League.

In the past eighteen moths, the Harmony Equine Center has branched out to include training horses for rescue groups.

“We are not a rescue group,” Leonard clarified. “That is not our mission. However, we believe that horses, with proper training have a chance to find new homes. “

Last year they trained over one hundred and fifty horses for rescues and adopted them out to new homes.  Horses are continuously coming in, being trained, and moving out. Some even go to Colorado State University’s Temple Grandin Equine Center to work as therapy horses.

The miniatures still needed to go through the intake procedure upon arrival in Colorado. Many still had burs in their manes and tales and were still considerably underweight. Burs had to be removed, and then the horses were put on the feeding protocol for starved animals.

“On a scale of one to nine, with one being emaciated and nine being obese, these minis were a two. I have no doubt that most of them were a one when they were first rescued by the SPCA.” Leonard explained. “So we free feed them grass hay all day long.” Leonard further explained that they are not looking for an ideal weight target for the horses, but rather overall fat content based upon feel. “We have to check their withers, hips, and shoulders. We just put our hands on them to examine them.”

So far, the horses have shown great improvement in their health, after their initial diagnosis in Texas of malnutrition and dehydration. In keeping with procedure, they must remain in quarantine for at least two weeks after arriving. During that time they are checked several times a day.

“We also have to work on basic things, like halter breaking, taking fly spray, and getting them to pick up their feet before they are ready to be adopted,” Leonard said, stating that for most horses there is a fifteen-point checklist. Since the minis will not be used for riding, the checklist has been shortened.

The sixteen rescued minis have not shown any unhealthy behaviors, and all appear to get along easily with one another in their paddock. Leonard reported that they entered and exited the trailer without issue, despite the unfamiliar people and surroundings. This does not come as a surprise since most miniature horses have calm temperaments, which even allows them to be used as therapy animals.

Miniature horses can be traced back to royal European culture of the 1600’s where they were stylish pets of nobility. Eventually some began to be used as work animals, having jobs pulling small carts or even carrying items into coal mines.

Leonard predicts that most of the miniatures, temporarily named after cartoon characters by the staff, will require about thirty days at their facility before they are ready for adoption. Adoption fees for horses are between $100 and $500, although Leonard estimates that the mini’s fees will stay on the lower end of the scale.

“The price also includes three free lessons for handling horses,” Leonard clarified. Anybody interested in adopting a mini, or any other horse at the Harmony Equine Center can contact their organization and be placed on a waiting list.

“We can teach some basic Horse 101 classes to you, and then have an inspector go to the horse’s future home to check it out.” Leonard feels confident that these minis will be adoptable, stating that miniatures are less expensive to care for while still providing a horse experience.

“People love horses. And we work closely with our community. We’re just trying to get good, quality horses back out there into the community.”